There's a group of people on facebook that I've had my own bad experiences with and keep hearing others claiming the same sort of things about, again and again. I have yet to hear anything positive said about this group in the three years that I've been aware of them. That alone says something about their purported reason for existing. They operate just like gang-stalkers in that they're a gang and they stalk people in the TI community who say things they don't like. Usually it's things said about themselves, even though this is no excuse to start posting announcements in public that are only intended to discredit the person without providing any hard evidence, nor is it generally a good idea to talk trash about people in private forums. It's far better to be mature and deal with the issues directly, with the person who says something about another taking it to that other person, rather than to spew their rhetoric behind their back, trying to convince others to go along with them.
From what I've seen and been told, this group uses private forums and conference calls to engage in gossip and rumor-mongering about other people, which is exactly what perps do. They seek to divide the TI community against itself by causing infighting and spreading hearsay and lies with no supporting evidence to back them up. At the same time, they recruit into their group those people with the worst characters and wackiest claims about targeting, which can only be intended to give the TI community a 'wackjob' reputation to the rest of the world. They attract these people because these people are incredibly gullible, or they're such little insecure wimps in real life that being a part of this group makes them feel big, picking on others for the merest things.
This group originated with OSI Informers, who has since changed his pseudonym to 'Will Litigate', but who is really Greg Gamache. I believe he is now also using the name 'Tim Lavenger' as well. He works with a large number of others on facebook, including members of FFCHS like Dee Hardin, Linda Johnson, Marika Banderas, and Ken Wilbourne Jr., so I assume that FFCHS is still in much league with them. This would make sense, since FFCHS apparently is only there to identify people (TIs or not) who might be turned into perps, or who are real TIs and who get perped further by this group and possibly others like it once they're identified. When I say that FFCHS is a cult, this group makes up it's private online army and is filled with its most loyal mind-controlled members. 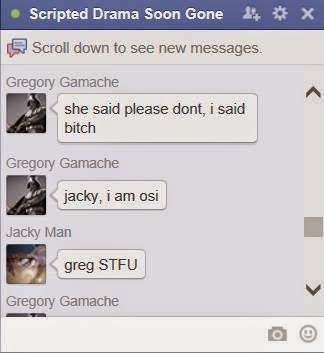 REAL targeted individuals know the tactics that perps use, and these ARE perp tactics that this group plays on others. Not once have any of the people associated with this group EVER produced hard evidence to back up any of their allegations against others. Instead, they try to convince others by repeating hearsay, twisting facts, or creating outright lies.
They cry and snivel about being called perps while calling others perps in the very same breath. Major hypocrites...
NO REAL TI would engage in organized online stalking and character assassination to the degree and with the obsessiveness that this group has done for at least the past three years.
In fact, like with FFCHS, I have no idea WHAT GOOD this group thinks it's doing for the TI community, engaging in these activities. They set a terrible example for other TIs to follow. Most of them use fake names and switch accounts like they switch underwear when the older ones get too many shit stains on them. They often put satanic symbolism in their pics, which reflects which way they lean. They act like immature little children, and I think many of them are truly mentally deranged and are in desperate need of psychiatric help.

Let me know if you have encounters with these people. I'm taking names and I'm gonna kick some ass...